Bitcoin Exchange Netflows Are Negative, Could A Bull Run Be Coming?

Bitcoin shows negative exchange netflows on CryptoQuant charts recently, an indicator that a bull run might be coming soon.

Bitcoin exchange netflow is an indicator that highlights whether more BTC is moving into exchanges than out.

A more technical definition of the term is that it’s the difference of the exchange inflows and outflows.

The exchange inflow is just the amount of BTC transferred to exchanges, while outflow is the opposite.

Here is a chart that shows the current trend in Bitcoin exchange netflow with the BTC price:

As is clear from the above chart, the recent trend of the Bitcoin exchange netflow has been negative. This means that more people are withdrawing their BTC from exchanges compared to those who are sending the <span class="wpg-tooltip-term-title">Coin</span></h3><div class="wpg-tooltip-content">A coin is a unit of digital value. When describing cryptocurrencies, they are built using the bitcoin technology and have no other value unlike tokens which have the potential of software being built with them.<p class="wpg-read-more"><a href="https://www.newsbtc.com/dictionary/coin/">» Read more</a><p></div>”>coin to exchanges.

On closer inspection of the chart, another thing becomes apparent. Negative netflow seems to precede an increase in the price of the cryptocurrency.

Before the 2021 bull run, the netflow was deeply negative for a prolonged period of time. It was followed by alternating negative and positive neftlows that resulted in the different peaks to form.

While the recent crash was accompanied by a deeply positive netflow. And it makes sense, as a negative neflow means people are selling off their Bitcoin investments in exchanges.

Now, following the pattern of the chart, the current negative netflow might also result in an increase in the price of BTC.

However, the netflow isn’t as negative as at the start of the year so if the price is going to rise, it won’t be as drastic as that bull run. 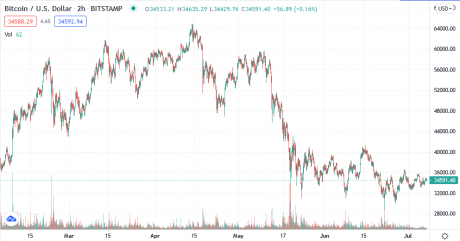 BTC has shown stagnation in the past couple of days as its value is stuck near the $34k mark. Market volatility is the lowest since the bull run as per some indicators.

It’s unclear when Bitcoin will be able to break out of this freeze zone, and which direction it will go in.

However, as mentioned before, a negative netflow might mean the price is going to rise soon. If a bull run is coming as it indicates, BTC might be leaving up from this flatline.

A notable thing is that while a bull run might be soon, it’s possible the rise could be only short-term. The earlier chart shows that not too long before the crash, the netflow was negative.

The next bull market in Bitcoin is now building a bottom. As a result, bears continue to rule the market,...

With the market in turmoil, digital assets such as Bitcoin and Ethereum are seeing their prices challenged in ways that...

On-chain data shows the Bitcoin long-term holder SOPR has recently observed spikes, suggesting that this cohort is still continuing to...