LEND Rallies Another 20%; Here’s Why It Could Hit a Record High

The price of LEND jumped another 20 percent in the last 24 hours, emerging as one of the most profitable assets in this quarter and year.

The LEND/USD exchange rate established its year-to-date high at $0.399 in early Friday trading session. Its gains followed a sharp 45 percent downside correction – that last week found a stable support level near $0.20. That renewed buying interest among traders, pushing the pair by as high as 98 percent in the later sessions. 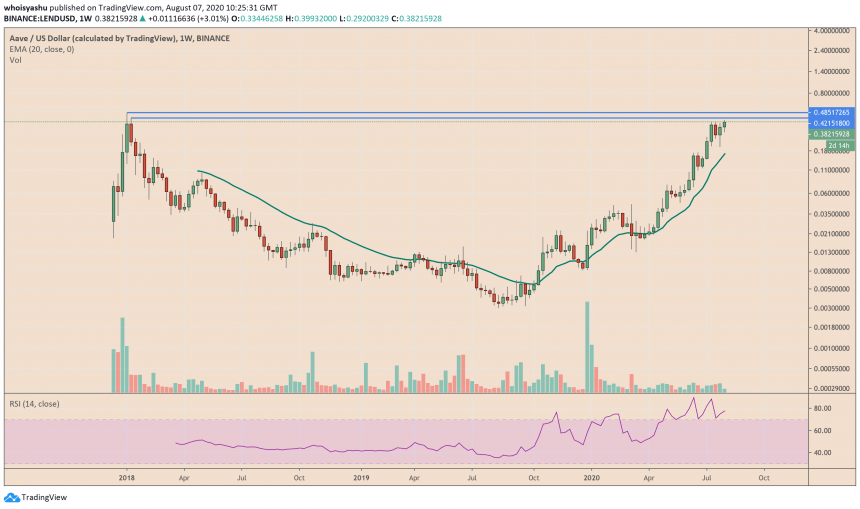 Much of the LEND’s profits this year followed a broader crypto market uptrend. After the March crash led by a global market rout, the Federal Reserve’s open-ended stimulus policy, coupled with a lending rate cut to near zero, reduced the liquidity pressure off investors’ shoulders.

As a result, they started buying every asset that could protect them from a falling US dollar and poor bond yields. The sentiment helped the cryptocurrency market, starting with rallies in the proof-of-work tokens Bitcoin and Ethereum.

But a slowdown in their uptrends shifted traders’ interest to the decentralized finance market. Most of the cryptocurrency tokens involved with the DeFi projects–be it staking, lending, or custody–surged higher in the second quarter by triple-digit percentages.

A bitcoin price rally towards $12,000 in the third quarter paused the DeFi rally. LEND, as a result, corrected by as much as 45 percent. But as Bitcoin showed signs of consolidation below $12K, the DeFi craze picked momentum all over again.

Jeff Dorman, the chief investment officer at Arca, explained why traders felt overly enthusiastic towards LEND. It begins with the economic model presented by the token’s issuer, Aave.

In retrospect, Aave is a lending/borrowing protocol that