The wBTC and wETH rewards are on pause until “less than 60 days”, as per a blog post from Poolin.

Poolin’s tokenized hashrate contracts, pBTC35A and pETH18C, have all their wBTC and wETH rewards suspended until less than 60 days.

The reason behind the move is China’s ongoing crackdown on mining farms, which has forced miners around the country to migrate elsewhere.

The 60-days timeframe correlates to the migration time needed to move mining farms out of China.

As a consequence of the rewards payout suspension, holders are pulling out of the contracts in hordes.

Here is how the pETH token price and volume chart looks like right now:

The chart shows that pETH price has rapidly corrected following the announcement.

Similarly for pBTC, the below chart highlights the trend in its price and volume: 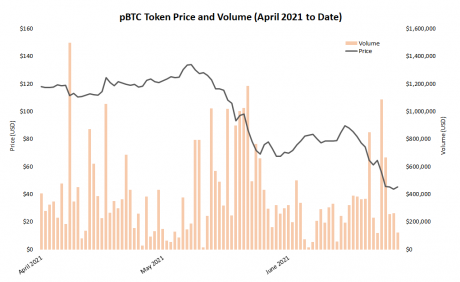 Two other notable takeaways from the graphs are that pETH hit a single-day $2 million turnover in volume for the first time ever, but pBTC only hit a monthly high.

The other high turnovers in pBTC volume were in the months of April and May. The first one corresponds to the coal mine flooding incident in Xinjiang that cut power supply to Bitcoin miners, while the second one was caused by the 21% difficulty adjustment.

The Poolin team plans to pack and transport their mining rigs to another location within 60 days, after which rewards are expected to resume normally.

It should be noted that while wBTC and wETH rewards are paused, Poolin is still offering rewards in the Mars token.

Mars is the platform’s native governance token, holders of which can usually vote on decisions relating to the platform.

However, for the decision of cutting out wBTC and wETH rewards, no Mars holder was able to vote. Poolin went forth with the initiative by themselves.

Here is a chart showing the trend in its price: 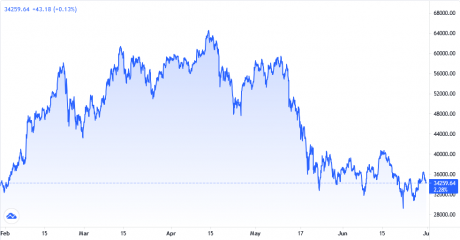 It’s hard to say where the price will be heading next. There is a possibility BTC is entering a <span class="wpg-tooltip-term-title">Bear</span></h3><div class="wpg-tooltip-content">Bear market is defined as a decreasing set of prices for various types of assets. A bearish investor wants to profit from the movement of dropping prices. You can think of a bear, swinging his big paw downward on the investment, crushing prices.<p class="wpg-read-more"><a href="https://www.newsbtc.com/dictionary/bear/">» Read more</a><p></div>”>bear market as a never-before wrong signal has been triggered.

Bitcoin all exchanges reserve seems to be making a gradual downtrend, a sign that accumulation has been going on. The...

Bitcoin has been moving sideways as the rest of the crypto market, especially Ethereum and the DeFi sector, show strength....

TA: Bitcoin Consolidates Below $35K, What Could Trigger Fresh Rally

Bitcoin price is holding gains above the $33,000 support zone against the US Dollar. BTC could start a fresh increase...

One latest news making rounds in the crypto space is the new partnership between the digital payment platform-Allied Payment Network,...

This China Business News article about hydropower stations will blow your mind. It contains revelation after revelation and clears the...