No Result
View All Result

France, November 4th, 2020 – Blockchain-Biometric ID startup, Uniris, is proud to announce that it has been named the ‘Trending Tech Product of the Year’ at The Noonies 2020 Awards, presented by HackerNoon, one of the leading tech blogs in the industry. 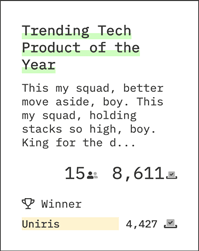 Unexpectedly emerging tops in a tug-of-war against more established tech products such as TikTok, BetterMe, Zoom, Substack, Netflix Party and others, the French-Indo startup was declared “King for the day”” 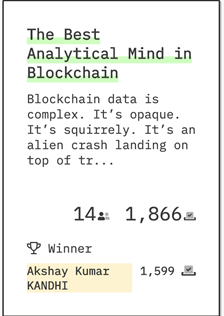 “It is an alien crash landing on top of traditional datasets that have dominated industries for decades and that is why, when the prestigious award by Hacker Noon ‘Noonies Tech 2020 – Best Analytical Mind in Blockchain’ was won by one of our team members, Akshay Kumar KANDHI, Head of R&D at Uniris, we couldn’t have been more excited as a team, to kick the door open into a new realm of innovation and progress and build the most secure system in the world!”

The Most Community-Driven Awards

Known to be the most community-driven tech awards, The Noonies are an annual tech industry awards event, established to recognize and reward the most innovative people and products in technology today.

The Noonies 2020 is the second edition of this popular awards event, which put up over 200 awards to be won, not to mention a prize pool valued at over USD 10,000. Award sponsors include .TECH Domains, Sustany Capital, Grant for the Web, Skillsoft, Flipside Crypto, Udacity and Beyondskills.

After a full month of public nominations, followed by two months of public voting, a total of 232,444 votes were cast for the 2,587 nominees, resulting in 221 award winners.

The Uniris ID authentication solution is one based on an internal scan of the complex venous network of the finger. This can be done on any authorized authentication device where unique individual keys are generated securely to decipher the decentralized keychain, after which they are not stored but deleted.

Users fully control their credentials without needing permissions from centralized authorities – identities are self-sovereign. As users never have to hand over their identities and companies and organizations never have the burden of data protection, Uniris provides a win-win solution in this era of privacy and data protection woes.

Ethereum followed bitcoin and rallied above the $4,000 resistance against the US Dollar. ETH is correcting gains, but the bulls...

Ethereum extended its increase above the $4,200 resistance against the US Dollar. ETH corrected gains, but it is well supported...

The numbers are in, and the Bitcoin Futures ETF had the biggest debut of the year. By far. We have...

Blockchain Firm Chainalysis Is Adding Bitcoin To Its Balance Sheet

Chainalysis has announced that it plans to add bitcoin to its balance sheet. The news came as a surprise to...