Bitcoin has regained dominance over the market in recent times. The digital asset has seen price recover towards previous highs, with less than 1% left for it to surpass its previous all-time high. This has so far renewed faith in the asset and the market and has seen sentiment move into the positive in the broader crypto market. Bitcoin has not shown any signs of slowing down since then.

On the index side, bitcoin has not taken any prisoners in its market domination. The digital asset has crushed every single index in the market and has outperformed indexes from small to mid-size, bar the Large Cap Index. BTC price shows that the asset is back in the lead. Trends show that it has only begun to rally. With October margins showing a 180% turn from September lows. This is quite simply bitcoin’s season.

Bitcoin Takes Charge Of The Market

Bitcoin’s numbers for the month have been nothing short of exceptional. It has led the charge for the massive recoveries that have been witnessed in the market. The total market rally was sparked by BTC’s upward movement which began at the beginning of the month and since then, the Large Cap Index has recorded an impressive profit margin. 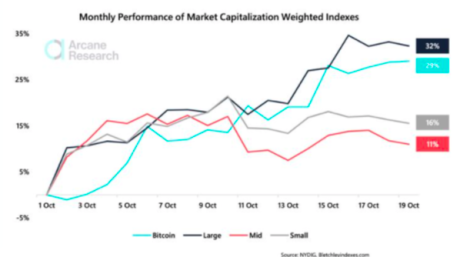 Both Bitcoin and the Large Cap Indexes have outperformed their counterparts in the market, which have not fared as well in the market. The top coins have recovered close to their previous all-time highs, pushing the total crypto market cap towards new all-time highs.

Ethereum Lacks Momentum Above $4,200, But Dips Likely To Be Limited

Ethereum Holds Key Support, What Could Spark A Fresh Rally

Small And Mid Cap Indexes Not Faring As Well

Both indexes had seen a favorable summer while bitcoin had suffered bitter crashes and dips. However, this has changed in favor of BTC following its performance in the market after summer ended. Trading volume had returned to the pioneer digital currency and it had surpassed the smaller altcoins in the market.

In addition to outperforming the Small and Mid Cap Indexes, Bitcoin has also maintained dominance over the broader crypto market. Right now, the BTC dominance sits at 46.9%, representing a two-month high.

Ethereum Lacks Momentum Above $4,200, But Dips Likely To Be Limited

Ethereum Holds Key Support, What Could Spark A Fresh Rally

What Ethereum 2.0 Looks Like As Vitalik Buterin Celebrates Its Birthday

The Ethereum 2.0 upgrades of the consensus layer built by multiple teams in the ecosystem promise to bring a “more...

Ethereum Topside Bias Vulnerable If It Breaks This Key Support

Ethereum trimmed gains from the $4,800 resistance against the US Dollar. ETH is down 5% and it might decline further...

Data shows Bitcoin open interest has remained high despite the dramatic sell-off that occurred a few days back due to...

TA: Bitcoin Reclaims $50K, Why 100 SMA Is The Key For Larger Increase